Those predictions saying the voting public would break records today will definitely include Berkshire County.

By early this afternoon, at least half of the registered voters at polling stations around the county had voted. Williamstown voters had cast just over 2,000 ballots; there are some 4,300 registered voters in town.  Stockbridge was at the halfway point a little before 4 p.m. and Cheshire, well, you had to see it to believe it.

There was a constant stream of traffic in and out of the Senior Center on School Street. Town Clerk Christine Emerson said the flow had been steady all day. Just before 6, about 1,700 people had voted. How many does the town have? 2,358

Cheshire had hit the 70 percent mark a full two hours before the polls closing. Let’s hear a cheer for Cheshire, which seemed to be rushing toward 90 percent (at least).

I stopped a few voters to get their reasons for coming to the polls today. Was it the presidential election? Those controversial ballot initiatives? All but one, a woman, said they voted regularly. “I never voted until a woman ran for president,” she said, crediting Hillary Clinton’s run for the nomination as inspiring her to register.

Of course, it’s not just Berkshire County that’s turning out; some 30 percent of voters in nearly 40 states have already voted over the past week or by absentee ballot. Get-out-the-vote efforts have been going on all 50 states and the territories over the past month by both parties.

With Massachusetts safely blue, the local Democrats have been calling into the swing states urging presumed Barack Obama supporters to vote. They’ve also been heading out to help canvass in swing states, including nearby New Hampshire. I talked with some of the people who have been manning the phones all day (and over the past week) and I’ll update later with what they had to say.

For now, I’m off to Clarksburg and Williamstown, before heading to Freight Yard Pub to watch the returns – and keep you informed.

Above, voters wait in line in Cheshire; below, signs prompt people along to prevent backups. 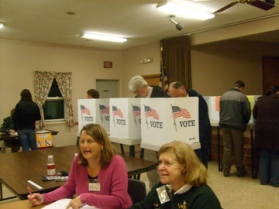 Like Loading...
This entry was posted in Uncategorized and tagged iberkshires cheshire voting election. Bookmark the permalink.